The Pennine Way: Men on a Mission (with a gear list thrown in) 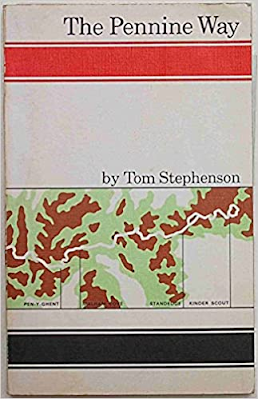 Having bought Tom Stephenson’s guide to the Pennine Way as a teenager I finally set off to backpack it 45 years later in 2019. Well it is important to mull over such ideas. Despite it being so long in the planning I failed miserably. That tale of woe and pathetic-ness was told here.

In 2020 I decided to have another try. Covid and lockdowns got in the way. A further date was planned for June 2021 and put in the diary. Mad ‘n’ Bad Andy Walker offered to walk with me for a few days of the trip which, I knew, would help considerably. I am certain that walking with someone else on longer trips is beneficial for me. Having company stops too much introspection and improves my confidence and determination no end.

Andy’s brain must then have got the better of him and, in an effort not to hurt my feelings by simply making up an excuse not to come, he drove around the lanes of Cambridgeshire for days on end until he eventually found an elderly couple who would assist him. They shunted his car into a ditch at very high speed. A serious shoulder injury meant he could not carry a pack. With some trepidation I realised it would need to be another solo attempt.

I sought information on decent places to wildcamp from ‘Johnboy’ Sanderson. John started backpacking aged about 14 months when his mum pushed him out of the back door wearing a lovely green fleecy romper suit and with a carrier bag full of sandwiches, telling him not to come back until he had walked the 105 mile Cleveland Way.

After that he walked the Pennine Way four times, once when he was 17, bunking off school to walk from Land’s End to John of Groats, with the Pennine Way as part of his route. Since then he has backpacked and mountaineered all over the world, from Patagonia to some mountains between China and Tajikistan, which I could swear he told me were called the Pam Ayres but which I now find out are called the Pamirs. I believe on an expedition there he tried squatting in a snow hole (ie living in it without consent, not performing his ablutions) dug by a Russian climbing team. Having been kicked out of that when the Russians returned unexpectedly he had to appropriate a tent higher up the mountain from which a recently deceased climber's body had just been removed. Well as he’s climbed to over 7000 metres above seal level I guess Cross Fell is relatively straight forward.

He gave my asked for advice then tentatively said  “I might tag along for a few days. If that’s ok”.  After about three-quarters of a nano-second I bit his hand off. Metaphorically, obviously. I’m not some sort of cannon ball, am I? A few days later he said “I wouldn’t mind doing the whole thing again, actually. Slightly slower this time. Take it all in”. He has previously backpacked the 268 miles in 9 days. “Would that be ok?” I bit his other hand off. I then did the decent thing and suggested that I might slow him down ‘a tad’ and that for him it might be rather frustrating to walk at my pace and perhaps he should reconsider. I actually had my fingers crossed behind my back when I suggested this as I didn’t mean it. Being either a good egg or very silly (of course it's possible to be both) he insisted that he was happy to walk at my pace. He didn’t even murmur when I said that I would be hard-pressed to even think of planning doing it in 17 days, let alone succeeding in achieving this. 14 days is thought of as a fast pace and 21 days is regarded as leisurely but I am in my mid-60s and would be carrying all my backpacking gear, not using a company to ferry my stuff from B and B to B and B as many seem to do these days.

A plan was hatched. Detailed with daily mileages, wild camp spots etc. As much as possible it avoided the guide book suggestions of the usual places for the starts and ends of each day, and which the majority of walkers adopt. We both expected the plan would not survive engagement with reality. Then came a throw-away line from Johnboy. “And of course the original route of the Way, the one I took in the 1980s, was very different out of Edale and off Black Hill...Lots of advantages to these earlier routes...Loads of work done to re-vegetate them...Not had that much rain recently...Those bogs will be nothing like they used to be…”

I set about my preparations. Lots of training walks were intended. Before these even began I developed a hurty foot. Physio made no difference. Then an agonising bad back (again) that lasted four weeks. Still, who needs training walks? Everyone who goes on YouTube knows that the secret to a successful backpack is not training. It’s producing a gear list and buying lots of shiny new stuff. I indulged with a vengeance. I honed my gear list down to the minimum weight possible. Then I gradually started to add all the 'just in case items'. Well you know how it is.

For those who, like me, are sad enough to be interested in these things, I now include the list of every single thing I took. Yes, I know. The base weight is heavy. After the event I reckoned that I could have cut about 660 grams of stuff that I never used. And there were several other things used but not necessary  There were also items not used but which I would carry whatever eg many of the first aid and safety items. Even then the base weight would still have been far more than many would carry.