Pennine Way Days 9 to 12: Deepdale Beck to Knarsdale: The Kindness of Strangers

This was a short day of pleasant walking but not especially memorable. We passed through Hannah's Meadow (that's a linky thing there about Hannah) in Baldersdale. John had camped at Hannah Hauxwell’s on one of his Pennine Way walks in the 1980s before television made her an unlikely star. John walked with his patched up boot, fortunately with the duck tape still holding the sole to the upper.

Middleton-in-Teesdale. We arrived well before midday and headed to the first café we saw. At the counter my brain said “We would like two large mugs of tea and two wholemeal rolls, the latter filled with the finest of fried local pork produce topped with a Size 3 free range. Oh, and kindly ensure that the roll is generously, nay lavishly spread, with lashings of unsalted butter and that the whole ensemble is then smothered in the very best tomato ketchup that Heinz produces. And make it snappy my good woman for our need is greater than the old ladies sitting here who have done nothing other than pop to the local Co-op this morning”. In fact I simply asked for a couple of mugs of tea with bacon and egg rolls and a plastic sachet of ketchup. But they still tasted damned good.

The Teesdale Hotel, our luxury* accommodation for the night would not allow us to enter until 3 pm. This gave time for John to pop to Raine’s Hardware store to try to buy boot repair products.

(* The use of the word "luxury" may not be entirely accurate. "Adequate" might have been better, although to be fair hospitality venues have had a torrid couple of years)

Raine’s is the sort of hardware shop that appeals to the middle aged and elderly. One of those places you find in many small towns. They sell everything, from children’s toys in faded boxes that have sat in the shop window since 1969, to plastic flowers, to dustbins, assorted nuts and bolts that can be bought singly rather than in packs of two hundred…and…amazingly, and hidden away upstairs in Raine's,…walking boots. Eureka. John now had the choice of two pairs. One pair by a well-known manufacturer costing two squillion pounds and one by “Hogg’s of Fife” costing somewhat less. Having lots of pairs back at home, and only needing something to last for another week he opted for the latter, and parcelled his ruined pair up to post home to do battle with the manufacturers, if necessary with the support of the Sale of Goods Act.

Apart from the normal B and B stuff like the much needed shower, washing our smalls and then heading off to stock up at the Co-op, the only other noteworthy mention of our stop in Middleton was the fabulously delicious meal we had at Forrester's French Bistro opposite the hotel. I had scallopy things followed by maple smoked duck breast in some saucy* stuff if you’re interested. You’re not? Well I won’t tell you what I had for pudding then.

(*That's not "ooo matron saucy", it's sauce saucy, sauce in this context meaning very fancy gravy). Do click on the linky thing there.

What a brilliant day's walking, in great walking weather. Mainly dry, a little sun, and just the right temperature. Absolutely fabulozy. Much of the way followed the River Tees upstream.

The scenery was wonderful. And it features well known landmarks such as Low Force, High Force and then onward through the Upper Tees Valley, which feels pretty remote and wild apart from the occasional farm. The path gets quite bouldery in places and is a little tricky for the unbalanced (mentally and physically in my case). John entertained himself by going ahead and then taking photos of me each time I slipped, grimaced or generally made myself look a pillock. He seemed to take delight in sneaking these out on Facebook at the earliest opportunity. Cauldron Snout was reached. It is very impressive. The path up the side involves a scramble, which would be easy wearing just a day pack but far less so for an old bloke with a large backpack. John floated upwards and was at the top whilst I was still huffing and puffing well below. I’ve commented before on John’s ability to go up fairly steep rock without touching it with his hands. By coincidence I came across this two minute video of legendary rock climber Johnny Dawes the other day. Click on that linky thing and be amazed. I am not suggesting Johnboy could manage a full on rock climb without using his hands but the video is still worth a watch in its entirety for the jaw dropping skill in evidence.

The weather was starting to look ominous by the time we arrived at High Cup Nick. We got the Duomids pitched on a platform high above the east side of the valley and then headed off to take photographs of this spectacular feature. This is a very definite highlight of the Pennine Way, but the whole walk from Middleton is just superb. And as it turned out it was a good job we took our pictures then for soon after the wind came up and the heavens opened. Big time. And as for the weather the following morning…

…it was horrid. Clag, wet and windy. Not a sign of High Cup Nick. It must have been stolen overnight. We had to lose a great deal of height before we were out of the cloud but were in Dufton by 9.15am. The café didn’t open until 10. As we stood outside ready to break open a snack the owner arrived to set up. I put on a very sad face and shivered a bit and so she let us in and kindly had bacon and sausages sizzling in the pan within minutes.

The rest of the day, for me, was a tiring slog. We ascended into the cloud again as we made the long climb up towards Knock Old Man and then stayed in this foulness for several hours, with the wind becoming increasingly fierce as we crossed much featureless ground. By the summit of Great Dun Fell the wind was gusting, I guess, to gale force. We plodded on over Little Dun Fell and on to the summit of Cross Fell, the highest point in the Pennines, at just under 3000 feet above seal level. No views, of course. The experience at the top was almost surreal. We arrived just before a large party who had walked up from Kirkland. They were all Christians on an annual pilgrimage in honour of some allegedly well known historical Christian figure with associations to Kirkland. Not well known enough, though, for me to have heard of him. The conversation around us in the wind shelter became increasingly bizarre as well as intense and philosophical as theology was discussed by the group, in between musings about Manchester United’s chances that afternoon as at least one of them was a fervent supporter.

We headed onwards and downwards. The plan had been to wild camp by Greg’s Hut, the bothy on the side of Cross Fell, or just beyond. I can’t quite remember why we didn’t. I know we weren’t keen on staying in the bothy as it was a Saturday and we expected it could be busy. As we walked on it became increasingly clear that we weren’t going to find a decent camp spot. Plan B was to get to Garrigill where camping at the village hall is possible. This added 10km to our planned day, really too much for me but I tried to be a brave little soldier. In Garrigill we asked a lady dressed up in a party frock where the hall was. She pointed it out, mentioning that the 'do' there that evening was to mark the christening of her son. The caretaker came over with us to show us where to pitch, how to pay the modest fee (“just pop it in the honesty box”), and gave us the combination code to the locks on the hall so we could use the showers, toilets and kitchen.
We pitched at the back of the hall as instructed, with the children from the party playing on the swings by our tents and dads in their best suits standing around chatting and knocking back cans of lager. All very weird but very friendly. I was dog tired. It was late and we still had to cook. At least there were picnic tables near the tents so we would have more than the usual levels of comfort.
John speculated. “I’ll bet there's far too much food in the Hall,” he said. At that very moment the lady whose party it was appeared at the tents. “We’ve got far too much food in there”, she said, and handed us a plate of sandwiches, rolls, pizza slices and cakes. No need to cook. A few minutes later trifles appeared. I went inside to thank the lady doing the catering. “Ooo you’ve not had coffee yet”, she said, “or would you prefer tea?” The people of Garrigill are wonderful. As is their village hall for camping. Do remember this if you are in the area. 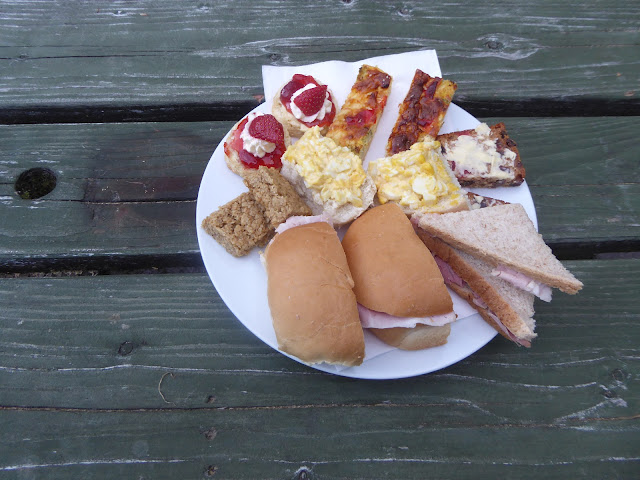 The weather was fine again. The walk to Alston, following the South Tyne River, was pleasant. Alston’s cafés did not appear to open on a Sunday but eventually we found one and also visited the Co-op and the Spar to fill our food bags. And pies may well have been purchased. In my case it was filled with black pudding and pork and lovely jelly stuff. Then it was off along the South Tyne again, with the Way making an uphill detour to walk by Whitley Roman Fort. Unspectacular walking, but not unpleasant and still dry underfoot. My theory is that if the Pennine Way was being devised today most of the route from Alston to Greenhead would change and it would follow the much newer South Tyne Trail along the old railway line to Haltwhistle then cut up to Hadrian’s Wall. But it doesn’t, although for one short 20 minute stretch as we neared Knarsdale, I did follow the South Tyne Trail whilst John, being a good boy and a purist, headed up some fields and then back down again along the Way proper.

The plan was to camp at Stone Hall Farm at Knarsdale. We arrived. The farmer’s wife explained that they hadn’t done camping for two years, “too much hassle since Covid” apparently. This would mean walking on and trying to find a wild camp spot. I did my best to look tired and generally pathetic. Not difficult. I think I even managed to make my bottom lip start to wobble like a small child who has been told that he can’t have any sweets. It worked. She pointed to a field we could camp in and took us to the outside tap to fill up our water bottles. More kindness.

We spent the late afternoon playing ‘What time is it Mr Wolf’ with the large numbers of sheep in the field. They stood in a long line watching us at the tents. Each time we looked away they moved a little closer. We would look round and the line of sheep would be standing still, only closer, watching us. We would turn our backs. Repeat. They got closer and closer. Eventually they would run off. A few minutes later they would do it all over again. Well it must be dull being a sheep in Knarsdale.