Is it possible to be ‘almost’ a virgin?  Well if it is, in terms of , I am almost a virgin.

Semi-retirement arrived for me this month.  One of the long anticipated advantages of this is the prospect of having more time to spend in the hills before my body finally rebels and tells me I am too old.  I have formulated various plans and goals about how I may make the most of this opportunity, keeping in mind that as the amount of time I will have available to enjoy myself has increased, there has been a corresponding fall in the financial resources I have to benefit from this time.   I think that is Catch 22, not that I have ever read Catch 22.

One of the things I want to do with this time is the TGO Challenge (TGOC), the unsupported annual coast-to-coast walk across .  Whilst I have masses of day hill walking experience I have never done any long backpacking trips - 4 days being the most I have ever done.  I also have limited experience of , despite having walked and climbed a great deal in , the Lakes, and the and over the years done various mountain leadership training courses.  The TGOC seems a great opportunity to rectify this limitation in my CV.

My understanding is that places on the TGOC are hard to come by.  In particular, I have been conscious that the entry form requires potential participants to set out their Scottish experience and I need to increase mine.  Thus, I recently set off on what was to be a gentle introduction to backpacking in Scotland and one that would also allow me to test out some new gear ie my MLD Trailstar, Oook Tub and MLD Superlite Bivi, which Martin Rye (@Rye1966) had recommended as a great combo of gear.  In addition I also had with me a new Neoair XLite sleeping mat, one of my leaving presents from work.  I found later that this had been designed by the devil, but more of that anon.

So at the back end of last week I landed in Blair Atoll at the southern edge of the Cairngorms, found a good spot in the village to abandon my car, and then sat there in the driver’s seat waiting.  It was heaving down.  And I mean heaving down.  Muggy, very warm, no wind but as much water as you ever did see.  I am aware that many backpackers have a sort of fatal acceptance and belief that they take bad weather with them.  I am starting to think like this.  It’s like watching play at football.  The only way to get them to score is to stop watching.  Irrational but true.  If I watch, they always concede a goal.

Anyway, after killing time eating my sarnies in the car, the rain eased and I donned the old Paclites and in the middle of the afternoon I set off up Glen Tilt.  This was to be no epic.  No navigation challenges, very little height.  Just me, a rather too heavy pack, some new scenery and a fabulous low level walk.

The River Tilt was a bit of a revelation.  You just do not get rivers like that in , my regular stomping ground.  In the Lakes the streams always look crystal clear, and they gurgle at you like a contented baby.  If it rains hard they sound a bit like a baby crying for its dinner.  Lah, lah, lah.  In contrast, the Tilt was a brown seething mass that would challenge and, I suspect, defeat the most talented of white water canoe specialists.  At first I wasn’t certain if this was its “normal” state.  However, I began to notice that trees that must usually be well above its banks were in the water.  It was very much in spate.
﻿﻿﻿﻿﻿﻿﻿﻿﻿
﻿
﻿ ﻿﻿﻿﻿﻿﻿﻿﻿﻿

And so I made my way along the track up the glen, passing on the way a few delightfully isolated cottages, some the haunt of holiday makers, others those of estate workers.  Forest Lodge was supposedly 8 miles from the road.  It felt a long 8 miles.  To someone less used to the Scottish terrain the notion that you can walk 8 miles along a valley without gaining much height is quite foreign.  But Forest Lodge was reached and passed.  I had now been walking for about 3 hours, and about 30 or so minutes after the Lodge there was a wide expanse of flat, if hummocky ground alongside the river.  There were already 4 tents here, but it was easy enough in this spacious environment to find a spot to camp without spoiling the peace of others.  Within 5 minutes the Trail Star was up, the practice pitching in the garden having paid off.  And a few minutes later it began.

I had heard about the Scottish highland midge.  But nothing had forewarned me as to just how terrible it is.  I was going to say that it hunts in swarms.  But “swarm” doesn’t do it justice.  The attack started slowly enough.  I started to notice the occasional irritating bite on my hands and along my lower back where my shirt wasn’t tucked in properly.  Nothing to bother about really.  I had even prepared myself with a midge head net and some of the legendary Avon Skin So Soft, allegedly used by the Royal Marines to keep the wee beasties at bay.  I spread this over my hands, face and arms and sure enough I soon started to notice the tiny creatures dying, stuck to my oily skin. 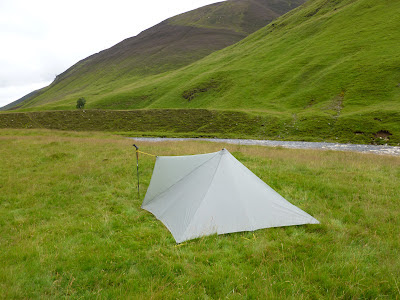 I started to prepare my dinner.  The swarms became multitudinous.  I leapt around, waving punching and slapping the air.  I cursed, alternately, the midges and the midge net, the latter because it seemed to make the heat rise to sub-tropical levels.  The attacks continued.  My face, my scalp my arms, my ankles, my back.  Nowhere was safe.

I retreated to the Trailstar.  This of course, was a complete waste of time being a single skin, door less shelter.  At this point I cursed, very mildly, because he seems such a nice chap, @bryanwaddington for his tweet to me at the end of May “My advice would be to use the Trailstar a bit before ordering an Oookstar…”  wasn’t to know he was advising a moron.  I now know that an Oookstar nest or similar is essential in in the midge season.  The inside walls of the TS were almost completely black as hundreds of thousands of the devil’s spawn made themselves comfortable, waiting for me to climb into my sleeping bag.

Ah, but I could defeat them.  I had the Superlite bivi.  I zipped myself in and peered through the midge net.  And got hotter.  And hotter.  I couldn’t breathe.  I opened the net.  They launched themselves at me.  Whilst I tried to fend them off the Neoair attacked me from below, bending and wrapping itself around me like the most amorous of boa constrictors.

The next 8 hours are now a blurred memory, a wakeful, prolonged nightmare.  I didn’t sleep for more than an hour the whole night.  I had naively thought that the midges would need their sleep too.  They didn’t, or they fed on me in shifts.  I will not describe the indignity of an attempted early morning ablute, save to say that the midges showed no respect.

The weather was still but the skies dark.  I was packed early and I headed off back down the glen.  After an hour or so the heavens opened again and I spent the next two trudging wearily back to the car.  As I got to the end of the estate road the sun came out.  I had long since decided I was a complete whimp to allow a few insects to spoil my two days.  Getting home again and seeing myself in a mirror, made me realise just how tasty I had been.  The dreaded lurgy itself never made a man’s body look so red, spotty and blotchy.  I counted over 100 bites just where my watch strap had been.  The Scots and all lovers of Scottish hills must be far hardier than I ever imagined.  Next time I will be more aware and better prepared….