Many years ago I received as a gift a coffee table book, 'Wainwright's Tour in the Lake District, Whitsuntide 1931'. 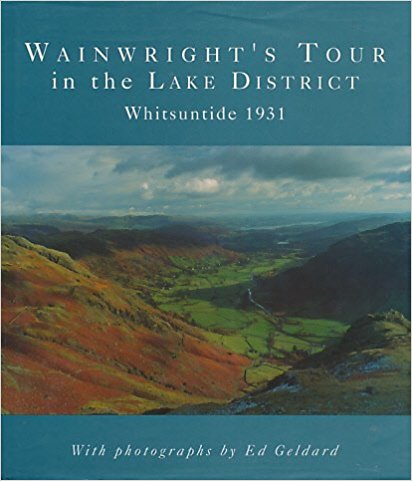 The book describes a week long circular tour of the Lake District, devised by Mr Alfred Misogynist-Miseryguts himself. He planned to do the walk with some of his pals from Blackburn, staying at farmhouses and bed and breakfasts en route. Not that Wainwright would have used the expression 'en route'. Not keen on foreigners was Alf. Never went abroad, if you discount Yorkshire that is, and never ate foreign food.  As it happened, his plan was too ambitious for them and they never completed the walk. The book may no longer be in print, but I see that it is available second hand on Amazon from just a couple of quid. It's worth a look, not least to see his marvelously written handwritten plans of the route.

As a Lake District obsessive I have, for many years, thought it would be a good thing to do something similar. Thus, I have recently sketched out a 10 day circular backpack of the Lakes, which I fancy doing later this year. I describe it below, and welcome any comments and suggestions for improvement from readers who know the Lake District well.

In passing, it is worth commenting that despite the oft mentioned compactness of the Lake District, my 10 day itinerary hardly scratches the map, and leaves many wonderful parts completely untouched, including the entire Northern Fells, much of the central area and so on. However, having climbed all 214 of the Wainwrights at least once, almost all twice, and some 20 times or more, I am happy to limit my ambitions for the walk. It does not need to be a peak bagging exercise.

Some larger scale maps of the route feature at the bottom of this post, together with a table showing distances and so on. The plan is to tackle the walk this Autumn if I can create the space in my diary. This is rather tight for reasons too boring to mention. I hope to camp out every night, mainly wild camps, but staying on a few commercial campsites when necessary. If the full 10 days is not available then I have an option of doing a semi-circular trek from Windermere to Keswick taking either 3 or 7 days, depending on whether I take the clockwise or anti-clockwise version of the full route.

When I finished my initial sketch of the route my first concern became the lack of resupply points on the western section -  potentially requiring seven days of food to be carried, something which I am not really prepared to do. A possible solution is to send a food parcel to the camp site at Boot if the manager there is prepared to allow this. I have not mapped out foul weather alternative days, but a quick look at the map suggests that these are easily available for each day that my main plan takes me up high.


I now have to sort out some dates to put this plan into fruition. I also need to arrange some decent weather and make plans for the dog, as I will not be taking him with me. Frankly, I do not want the extra weight that would entail, or the extra responsibility of looking after him, nor do I want to have to leave him outside the shops in Keswick or Ambleside when I am buying food.

And one final thought. A ten day backpack? Sounds like a good excuse to buy any new gear that I might possibly need. Happy smiley face, cheeky winky face.