Pennine Way Days 13 to 15 Knarsdale to Byrness: In which I crack a good joke

As I write, autumn is not doing that romantic "season of mist and mellow fruitfulness" stuff. Rather, it is doing the less poetic and more typical, "season of grey cloud and occasional drizzleyness". This is not helpful when reflecting back on the leg of the Pennine Way from Knarsdale, which is thought by many to be the most dreary of the whole 270 miles.

Actually, in my opinion it wasn’t the most dreary. That was yet to come.

We set off from Knarsdale. The way as far as Greenhead was dull, with little excitement or merit, but I was thankful that the paths, such as they were (for very often they were not in evidence) were relatively dry. Some boggy sections, yes, but not as bad as most of the guide books made out. Whilst I have various pictures in my mind of the landscape we crossed during the morning I do not have the literary skill to describe them. Grass, reeds, green-brown, a little tarmac, a gravel track and then a descent to the A69, a locked five bar farm gate which had to be climbed, despite this being a major National Trail. This was followed soon after by a walk across the golf course at Greenhead, with more obstructions on the Way at this point, including a barbed wire fence. And no, our navigation wasn’t at fault. The photo above, taken immediately after the golf course shows how little this stretch is walked. Walkers have clearly been forced to divert on to the adjacent Hadrian’s Wall Path rather than following the Roman Vallum, the actual route of the Pennine Way here. I have contacted the Rights of Way people at Northumberland County Council about this twice now. Despite their promised ten day response time I’m still waiting, almost two months later.

Just above Greenhead is Thirwall Castle. John raced around it recreating some of the photos he had taken there in the 1980s. I plodded on, in the knowledge that he would not struggle to catch me up. We then came to a far more interesting stretch of the Way which for the next several miles followed this old wall thing. I really ought to do some research and find out who built it, when and why. I heard a whisper that it was put up by some chap called Hadrian who led the set building team for the film ‘Robin Hood Prince of Thieves’ starring Kevin Costner, and abandoned once filming was over. I think that may well be true.

Lots of short, steep uppiness and downiness bits followed, and then a longish downiness bit to our camp site at Twice Brewed. The grass pitches suffered from either bogginess or slopeyness and midgeyness, but the site does have a very good communal bit with a kettle and things, and turned on radiators which John and I purloined and covered in rinsed through socks and shirts. Better still, the camp site is only about half a mile from the Twice Brewed pub so we spent the evening pumping money into the local economy and real food and beer into our stomachs.

We climbed back to the old wall which really is spectacular in places, and as I walked along it I marvelled at the skill of the set builders who had worked for Hadrian on ‘Robin Hood Prince of Thieves’ and also thought about all those actor luvvies and how tough they must have found it, sitting and sleeping in their massive trailers in between filming in the harsh Northumbrian climate. I had been told by John that we would come to “that Sycamore” today. As my camera clicked away at the tree from a good view point above it John didn’t bother stopping but waited for me in the gap below.

“Didn’t you want to get a photo of the tree”, I said. “Kevin Costner and Morgan Freeman rode past it you know”.

“Ermm. Not that tree they didn’t. Sycamore Gap is twenty minutes further on." Well trees all look the same to me, but John has a degree in Forestry so I didn’t argue.

Soon after the genuine film star tree we left the old wall thingy and headed on to what I came to regard as the worst section of the whole of the Pennine Way. I knew much of it would be in forestry plantations and envisaged long, easy-but-dull walking on forest tracks. And indeed, that was the case as we entered the forest. The route then degenerated into narrow, wet, boggy paths that seemed endless.

I decided to cheer us by thinking up and recounting a very good joke. It was a joke that could have been made by one of my heroes, a man I try to emulate. My life role model (not a ‘life model’ as I always wear clothes in public).
“Who is that?” I hear readers cry.
Well it is, of course, none other than Mr George Pooter, the hero of ‘Diary of a Nobody’ by George and Weedon Grossmith. Mr Pooter, like me a nobody, was an Edwardian with a splendid sense of humour. He used to crack very good jokes to entertain his wife Carrie and son Lupin. For reasons that escape me, Carrie never laughs, even though these jokes had Mr Pooter (and me whilst reading the book) in absolute stitches. You really must read it if you haven’t already done so. It will have you in hoots. I often make jokes in the same style to Mrs Fellbound. They can be so funny she usually leaves the room immediately I announce the punch line, I assume because she feels it unbecoming for someone of her refined breeding to belly laugh in front of her husband.

Anyway, you will recall that John had bought new boots a few days back after ruining his original pair in a drunken stumble at the Tan Hill Inn. The new boots were made by Hoggs of Fife. Now they were very good boots and very reasonably priced but being new, and higher than his normal mids they were causing the poor chap quite some ankle pain. My joke, I knew, would take his mind off his not inconsiderable discomfort.

“Those boots”, I cried, "made by Hoggs of Fife. Are they still hurting?”

“They are indeed”, replied the poor chap.

“Well then", I said, "perhaps we should refer to the makers as “The Pigs of Fife”.

Well, I couldn’t stop chuckling for the next few kilometres and kept referring to his boots as “The Pigs”. I’m pretty certain John was very amused and that my joke had done wonders for his morale. As I laughed away to myself he walked off ahead of me, my joke clearly having taken his mind off the pain, which must have been slowing him down but now he was able to race on at pace again.

We arrived at the Camping and Caravanning Club site on the outskirts of Bellingham. The facilities there are brilliant for backpackers, which was just as well as the evening walk to the village to support the local economy was rather longer than we would have wished. 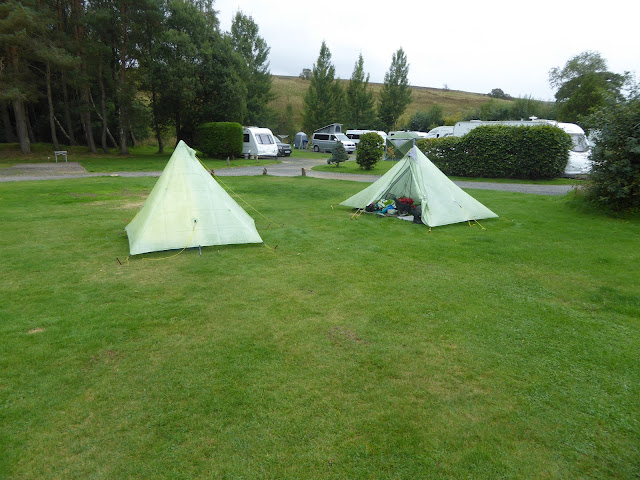 I hadn’t especially been looking forward to this day, as much of it was to be in forestry plantations again. However, it turned out to be delightful and one of the most enjoyable.

After the steep pull up the lane from Bellingham we crossed fields and attractive moorland. On crossing a footbridge we came across a plastic bag pinned to the wooden rail labelled “For Danielle”. It looked like it contained a bar of chocolate. Later there was another bag for Danielle containing what looked like mints. We speculated. The mystery would be resolved two days later.

In no real hurry today, we lazed in the sun on the top of Whitley Pike, the peace somewhat spoilt by the noise of military helicopters circling overhead for well over half an hour. But the weather was good, it was dry underfoot, and the scenery pleasant. After skirting Padon Hill we made a steep descent followed by a rougher and steeper ascent to the edge of the forest that would take us to Byrness. 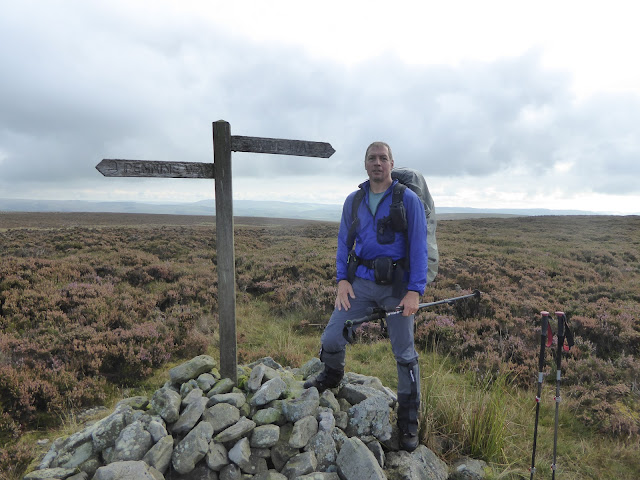 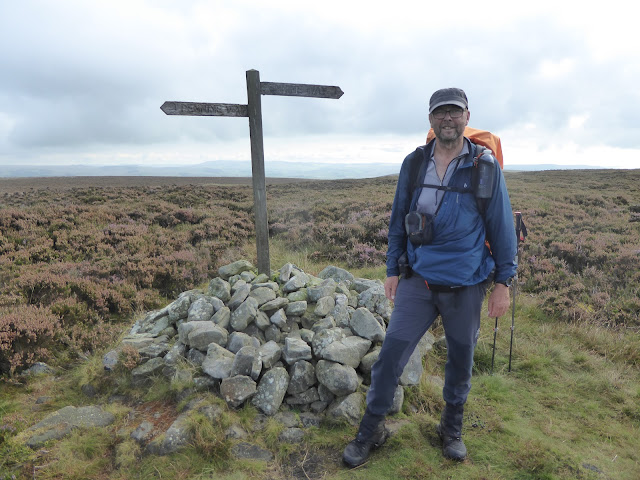 From the edge of the forest the tracks were both easy and excellent all the way to Byrness. I decided against jokes today. With hindsight I guess I must have felt like Churchill after his “This was their finest hour”, speech made in 1940 after Dunkirk. He probably realised he could never surpass such oratory. Similarly, if I lived a thousand years I could never achieve such comedic heights as on the previous day.
At one stage John produced a photograph he had taken in the forest back in the 1980s and announced he was going to find the very same tree and take a photograph by it. He then noticed that the conifers today were the same height as in 1984. I told you he has a degree in Forestry. He’s no mug when it comes to trees. A plantation had matured, been cut down, replanted and re-grown since his last Pennine Way.
Byrness and the Forest View Walkers Inn. A slightly weird but delightful set up. We had pre-booked to camp in the back garden, which is free if you also book an evening meal.  There were half a dozen or so other walkers there, only three of us camping, though, and almost all the others using the baggage transporting and Bed and Breakfasting services along the sections of the Pennine Way they were hiking. The place was taken over by Laura and Oliver earlier in 2021. Laura does the front of house stuff and is lovely, and couldn’t do enough to look after the guests. The dinner and beer were good. I would highly recommend a stop here if you are walking in the area.