A wise old hand with a beard who had successfully completed many TGO Challenges had told me before the event that a real danger point was the morning of Day 3 as tiredness would be setting in.  His sage advice was "have a lie in in your tent then make yourself another bacon butty before setting off".  As it happens I had felt great on the morning of Day 3.  Day 4 was different.  This surprised me as I was in a B and B, and had enjoyed a great dinner the night before.  But on Day 4 the weather was decidedly yukky.  Heavy, prolonged squally showers of rain and sleet.  The night had seen a dumping of snow to relatively low levels on the hills.  I was due to walk from Spean Bridge up to Loch Ossian and find somewhere to wild camp by the hostel.  And I didn’t feel like I wanted to be doing that.  I really didn’t.
I was awake by 4.00am fretting.  By 5.00am I was googling train times home from Spean Bridge.  I had had enough.  I was worrying about the walk and the conditions.  I was worrying about finding a decent camp spot.  I was worrying about how windy it would be for my tent. What if there was even more snow?  I didn't have any spikes or ice axe.  I wasn't doing the tops but there was a fair bit of snow about, or so it seemed and who was to say that more wouldn't come down.  It was cold enough.  Scotland in May.  I don't complain but this blog post simply relates how I felt on the day.
I was still well aware of the train times at breakfast, but by then I had decided that I couldn’t simply give in after all the mental investment I had made in this over the previous 6 months.  Other Challengers would be doing far harder stuff without complaint. But I would do my foul weather alternative (FWA), an even lower level route to my main one.  It basically followed the Spean Valley to Loch Laggan and beyond.  This would take at least 2 days and would mean I would miss my planned legs to Loch Ossian, Loch Pattack and Dalwhinnie.  Even now, after this decision I was checking times of trains from Tulloch Station.  This was near my FWA and would be another place I could dip out and go home.  My reasoning was that at least I would have completed 4 days rather than 3.  In the B and B was a guide to the East Highland Way, which  I had never heard of.  I tried to memorise bits, as parts of this coincided with my FWA and other parts seemed a better route. 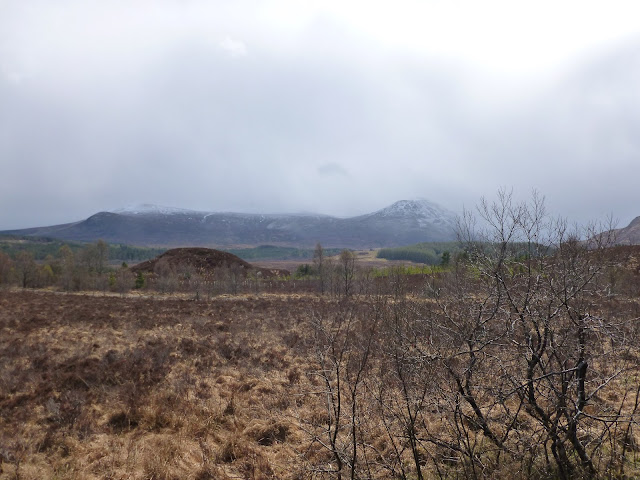 I popped down to the village to the Post Office and bumped into John Woolston and Chaz and Dave.  John tried to encourage me to do my original route – he was going as far as Corrour Lodge.  But he had a place booked in the hostel and I was camping up there.  I had made up my mind.  FWA or home.  So I set off following the lower level valley route.  I became more comfortable in myself I was walked.  I hadn’t given up (yet) and I was making progress east.  And that’s all that mattered in my mind by this time.  I had never planned any heroics.  Just get across.
The weather was squally.  Really strong gusts when the rain came.  As the day wore on the the rain turned to bouts of sleet and hail.  By mid to late afternoon I had gone several km beyond my original FWA planned stopping point and reached Luible, near Moy Lodge where there looked to be some possible camping spots.  As I scouted for one I was hit by the worst squall of the day.  The wind was really strong.  I would have estimated it was gusting to over 50 mph.  I was struggling to stand at times.  It came with sleet and hail, driving horizontally and cutting into the exposed skin on my face.  There was no way I could start to put a tent up.   Nor did I think the tent would take it.  I thought about sheltering until it passed.  But I was also conscious that this squall could be repeated again and again – they had been coming all day and had got progressively worse.   I wasn't certain what to do for the best.  So I started to walk along by the main road towards Laggan with no fixed plan.  Perhaps I would find somewhere more sheltered to stop further along the road.  The extreme weather continued.  The occasional car went passed.  I didn’t want to camp in this.  I stuck my thumb out.  I would hitch along the valley and find a B and B.  Then, out of the elements, I could reassess.  I was consoled by the fact that at least I had stayed down low.
I then became the recipient of the sorts of generosity lots of local people show to Challengers.  I was picked up by an elderly gentleman driving to Edinburgh.  He used to climb in his younger days.  He took me to "Wolf Trax” mountain biking centre along the valley.  The people there then started to ring B and Bs.  They found a room for me at The Rumblies in Laggan.  Relief flooded through me knowing I would have a roof over me that night.  One of the staff there was about to set off home.  She lived in Laggan and would take me to the B and B.  The sun was out again now, of course.

﻿
The Rumblies was warm and welcoming.  Fiona the landlady told me that of course it was ok for me to make up my dehydrated food in my room, as the hotel in the village was closed that evening.  No, a taxi back up the valley tomorrow would be very expensive; she would drive me back up to the point I had hitched from after breakfast so I could continue the Challenge.  That point was now well off my FWA.  I decided I could get to Newtonmore in a long day so phoned a B and B there too.  By now my mind was simply telling me to make progress east.  Not quite the spirit of the Challenge.  Surely this weather pattern would stop soon and we would get a spell of more settled weather?  Even Scotland must have spells of settled weather.  But the next day was all sorted.  What might sound a small feat to others, especially those crossing high level routes, had been a major one for me.  I wasn’t giving up.  I had almost bottled out but I hadn’t done so.


The weather had calmed considerably by the next day.  I breakfasted watching a riot of small birds of so many species on the bird feeders outside the dining room.  The sun was peeping through the clouds.  Fiona drove me up to Moy Lodge.  It was far further than I remembered from the previous day.  I walked through the “Glenbogle” estate of that twee Monarch of the Glen TV series. I made a short detour to the tea shop that I had got in my head from the drive the day before was situtated at Aberarder Lodge.  It didn't exist. The sandy beaches at the end of Loch Laggan looked superb in the strengthening sunshine. I later found a wonderful spot to lunch in the sun and felt more cheerful than I had done for 48 hours.  I was back at Wild Trax by mid-afternoon.  The mobile tea shop was closed.  Story of my Challenge.   I plodded on.  Too much road walking but I was going east(ish).  I went through Laggan, where my day had begun, after 5 hours of walking.  And then on to Newtonmore.  It had been a real slog and a grind.  I was dog tired.  But I was now ahead of my original route plan.  The following day would see me get back on to that by just a very short recovery walk to Kingussie.  Two not very good days but the prospects were now looking up.