Come On Head: A Walk Along the Pennine Way 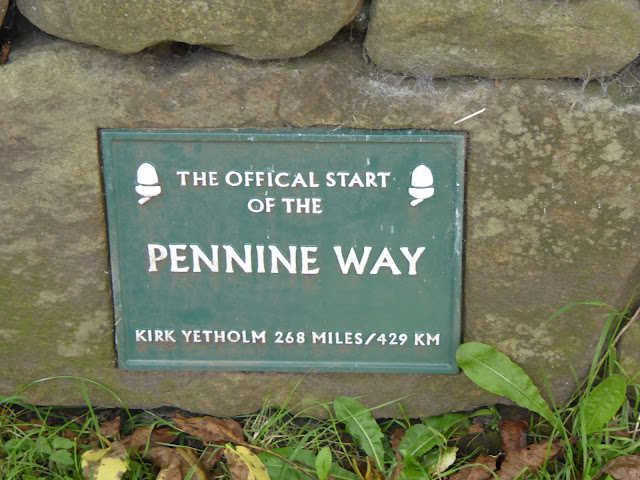 I set off from Edale at 1.10pm after a rather unpleasant baked potato with cheese and beans at the Old Nag’s Head.  I am only surprised I didn’t have a stroke whilst still eating it, given the amount of salt the cook had added.

The nastiness of lunch was soon forgotten in the fabulous walking weather as I crossed the fields to Upper Booth.  Sunny spells, interrupted only by lovely white fluffy cumulus clouds which scudded across the sky.  Have you noticed that clouds always ‘scud’ across the sky?  Why is that?  Let me tell you.  It’s because most people, including me, virtually never pick up a thesaurus.  Well I just did, and, to my surprise, I learnt that the word ‘scud’ was used in Gaelic and Manx to refer to the clouds themselves, which were believed to drive the wind.  Anyway, the clouds were scudding, skimming, darting and flying across the sky.  A bit breezy, yes, but nothing to worry about.  I was feeling good, confident, and fit, despite the lack of any proper training.  I even walked through three fields of cows without ‘Mad and Bad’ Andy Walker to hold my hand and shoo them away.


By Upper Booth rain drops were falling on my head.  Just like they did on poor old Sacha Distell.  You know, in that film.  Where Butch Cassidy cycles across Bolivia with that woman on his handlebars.  Waterproofs and pack cover time.  I’d heard of Jacob’s Ladder, the next landmark on the route, but didn’t really know what it was.  Just that it was the first steep climb of the Pennine Way.  Now I don’t want to sound boastful or crude but, to use a backpacking term, I pissed up it, overtaking a young bloke in shorts, who was only carrying a small day pack, and who looked dead ‘ard.

The wind picked up.  By Kinder Low it had picked up a bit more.  By Kinder Downfall it was doing the Kinder party trick of picking up the waterfall and blowing it uphill, causing a storm of wetness to hit me as I forded the stream.  Just after the Downfall the wind picked me up and dumped me against a big lump of gritstone.  Hmmmm.  I carried on along the Edge.  I noted that Sandy Heys looked a good spot for pitching a tent, but not on a day like today.  As I descended the steep drop after Sandy Heys towards the col before Mill Hill I was blown over again, fortunately into the slope to my side.  I tried to stand and was forced down again.  I sat there, not wanting to risk getting up again.  What had so far been a challenging but fun experience was turning serious.  As I said to myself, “Well, Fellbound, what has so far been a challenging but fun experience is turning serious.”  I could no longer wander along in my own world.  “Come on head,” I told myself, “keep calm, concentrate and switch on brain”.  So I did.

The original plan had been to wild camp about a kilometre to the east of the col near the site of a 1950s aircraft crash site.  Would it be sufficiently in the lee of the hill to be safe?  More hmmming.  But the head was working on alternatives.  I soon had my plan.  I’d carry on down to the col then descend east towards the crash site for 10 minutes or so.  If it was appearing sufficiently more sheltered in that direction I’d carry on as planned and wild camp there.  If not I’d climb back to the col and escape west off the plateau and down William Clough to the camp site at Hayfield.  All this time I could see a figure sitting down at the col, not moving, but obviously watching me.

I continued the descent to the col.  The figure stood up.  A young woman with a very large pack, who was on her own northbound Pennine Way journey.  Did I think she would make Crowden before dark, she asked.  It was about 5.00pm.  I did not know how fit or experienced she was but the very question hinted at the answer.  I replied simply that I knew I couldn’t.  It turned out she had started a couple of hours before me and so was clearly making very slow progress.  I explained where I was thinking of camping.  “What facilities does the camp site have?” she asked.  I sort of explained that it had a stream, a lot of heather and peat, and some scattered pieces of two jet aircraft, but not much else.  I suggested that instead she might think about dropping down to Hayfield.  She only had a strip map of the Pennine Way itself so didn’t know where Hayfield was.  My decision was, therefore, in effect made for me.  In any case, it was still so windy at the col that I already suspected that my planned wild camp would be foolhardy.  I offered to show her the way to Hayfield.  It was a long, slow plod down the rough, slippery path in William Clough as the dusk gathered.  I stopped at the Camping and Caravan Club campsite; she decided that even there it was too windy and so the site warden booked her into a B and B in the village.  I’d walked for almost two hours more than planned, and lost about 1000 feet in height, all of which had to be made up the next day.  Still, I felt stoic as I cooked my evening meal in the dark.


It must have been about the time that I wearily crawled into my sleeping bag that Heathrow, Gatwick, Charles de Gaulle and JFK airports were for some reason closed and all planes in the western hemisphere were diverted and instructed to land at Manchester Airport.  “There’s a stiff westerly wind so take the flight path in over Hayfield”, the pilots were all told, “go in low, if possible just above the height of the street lamps.”  Well that’s what it felt like.  I got little sleep.  But I’d seen a Youtube video only a couple of days earlier made by a very experienced American backpacker.  He gave some very wise advice.  He explained that he rarely slept well when in his tent.  The thing was, he said, just to accept that you will keep waking up and not worry about it.  So that is what I did.  “Well done, head”, I muttered at one point in the early hours.  That Zeno of Athens was onto something when he philosophised about stoicism 2300 years ago, I can tell you.  As was the bloke who invented the pee bottle so you don’t have to go outside in the middle of the night when you’re in a tent and it’s pouring down.