TGO Challenge Day 13: The End of the Affair 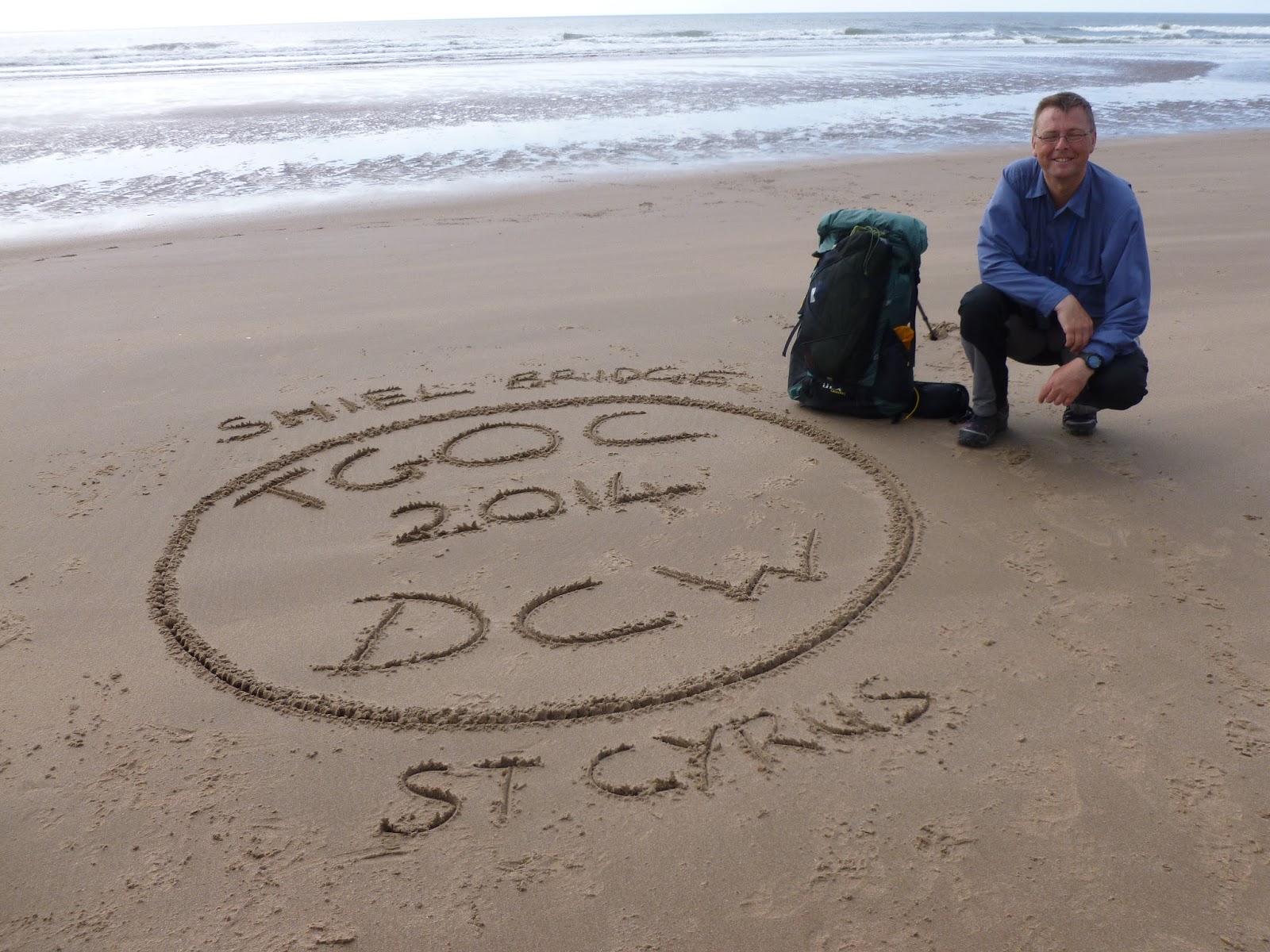 Last day of the 2014 Challenge. I was up early, as was John Sanderson, so we set off together to walk to the beach at St Cyrus. John kindly kept his pace to below his normal four minute mile and so I was able to keep up. It was possibly the best day of the fortnight weatherwise, fair and warm. The route to St Cyrus from Northwater Bridge isn’t spectacular but still perfectly pleasant, all along country lanes, excepting the track over the hill of Morphie and the cliff path down to the beach.
We shouldered our packs down to the beach rather than abandoning them at the top – well it wouldn’t feel right not to make sure your pack had done the full journey, coast-to-coast, shoreline-to-shoreline, would it?

And so we arrived at the beach, the end of our Challenge. We did the normal things that Challengers seem to do.  Being British we shook hands and mumbled "well done old chap" at each other.  Being in Scotland we had a slug of whisky from the hip flasks. Being at the sea in the sunshine we had a paddle (John bravely dipped bare feet in the water; I managed to get my trail shoes in). Being Challengers we marked our crossing with that circle in the sand thing. Being blokes we found two pretty young women, who happened to be walking their dogs on the beach, to take our photographs.


We then made our way back up the cliff path. As we left the beach we met the American group of Joe Valesko and his two colleagues from Z Packs, just arriving.  They all had unfeasibly small packs on. Having checked out Joe's gear list on the Internet I note his first aid kit weighs about 0.5 of a gram, which by my reckoning means it must contain about one paractamol and an Elastoplast. When we got to the top of the cliffs we heard a hollering and a whooping from far below us as the Americans did those high dive things slapping each others' (should that have an apostrophe?) hands, and then screams, and more whooping, and more a hollering as Joe took a dip and realised that the North Sea is slightly cooler than the waters round Florida. Johnboy smiled at all this, but my upper lip went decidedly stiff at all that palaver, I can tell you.

Then it was off to the café for morning coffee and cake before the bus to Montrose and Challenge Control to sign out. I’d finished a day earlier than planned. After some agonising the previous day I had decided not to hang around for the Challenge dinner but to get home and that is what I did.
That’s two Challenges under my belt. Will I enter again next year? Not certain. I shall touch on the reasons for this when I do my final post, with some reflections on the 2014 Challenge.