I have always cooked on gas whilst out in the field or on the hill but have long felt, for reasons that escape me, that I ought to try meths.  I want to like meths.  When I say "try meths" I mean use it in the Nigella Lawson rather than the Keith Floyd way ie as a cook and not as a drinker, not that I am suggesting that Keith Floyd ever reached for the purple liquid when he felt the need to rehydrate his body.  My hypothesis is that my fixation on the notion of cooking with meths is related to memories of childhood experiments using my chemistry set which had a small meths burner to heat up various chemicals which we used to mix at random.  Can these sets still be purchased, I wonder, or have risk assessments done away with them?

So after extensive research on various meths stoves ie reading a blog by Andy Howell and asking Robin of Blogpackinglite a question in less than 140 characters, I ordered a Caldera Cone that arrived on Wednesday of this week.  Thus, since opening the parcel I have had ample time to carry out in depth scientific testing both of the burner / windshield system by itself and also to undertake some comparative tests against the main competitor. Indeed, these tests took me over 11 minutes so you can see that "FellBound" could easily come to be regarded as a byword for "thoroughness" in the scientific community.

I am now pleased to be able to report on the findings, which would, no doubt, have been eagerly anticipated in the backpacking world if I should have announced the tests in advance.  Like a North Korean missile testing spokepserson I did not do so, but can now reveal the existence of the research and my conclusions to an open mouthed, drop jawed, stunned community of backpackers and any other people sad and bored enough to read my blog. 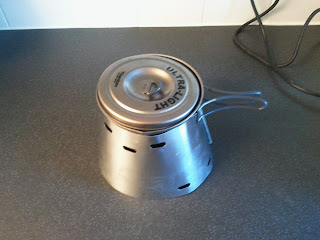 Weight: 1650 grms
Pot: Integrated with the heating device
Quantity of water: 3/4 of my "I  Love Cheryl Cole Mug"
Boil time: 1 min 14 secs
Amount of fuel used: One spin of that dial thing on the meter
Wind speed: 2 mph (Faster than above because I had to open the kitchen window to get rid of the smell of meths)
Air Temp.: 14 degrees (I think the Caldera Cone may have heated up the kitchen quite effectively) 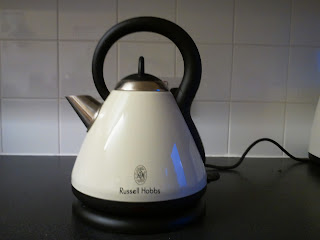 The results of these tests must be interpreted with caution. This scientific research has yet to be peer reviewed and validated.  On balance I would suggest that the Caldera Cone would be more suited to backpacking and wild camping than the electric kettle.  The latter, however, is probably cleaner, and more convenient for making a cuppa for your spouse when having a Sunday morning lie in.  However, further research is advised to see whether these results can be replicated.

The meths, incidentally, tastes better with a dash of tonic and slice of lemon.*

*Warning:  Drinking meths indoors before 6.00pm is considered vulgar by all well bred people.  I am also advised that it might not be entirely healthy so take with a pinch of salt. This blog post, not the meths that is.