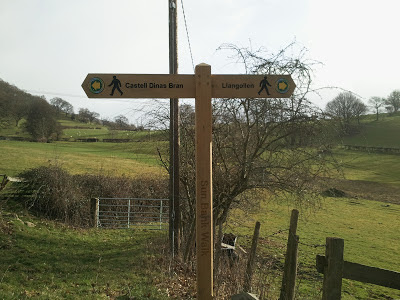 
I have done the same. Often.  I have even visited Llangollen, many times, but until yesterday I had never bothered to find the hour needed to walk from the town to the castle.  Yesterday I did so, as part of a longer walk, and the whole day proved most rewarding.  The walk was part of my, as yet sporadic, attempts to get fit for May’s TGO challenge in Scotland.


The weather forecasters had promised what is now called a “weather window”.  That is what any normal person over the age of 40 would call a few hours of sunny spells in between bands of rain.  The weather forecasters were almost correct, not least because they had added that this particular "window" would get splattered by showers and that a hoolie would be blowing.  As an aside, has anyone ever noticed that the girl next door, Carol Kirkwood, and her ilk now also often refer to rain forecast to occur on “western upslopes”? What in Thor’s name is that all about?  What is a western upslope?  Don’t slopes go down as well as up?  Is a western upslope different from a western downslope?  And what do they mean by a “western” slope anyway?  Do they mean any old slope in the west of the country or do they mean a slope facing west?  I think they might be better using expressions such as “to the west of the Pennines” or similar and even refer to "orographic uplift" rather than pandering to the lowest common denominator.  But then I’m only an old pedant suffering from a chronic case of SKOD.   And another thing.  Ever since Michael Fish cocked up the hurricane warning in 1987 have you noticed how weather forecasters have to scare the living daylights out of us all so that no-one can claim that they weren’t warned?  Bad weather is hyped up (another under 40s expression, I believe) whilst predicted good weather is played down, unless it’s that woman who says “scorchio" all the time.  I like her, I do.  But don’t get me started on the use of the terms “weather event” or “wintery mix”. And, no, I do not need to be told by weather forecasters to “take my brolly” when they have said it is going to rain.

Anyway, the steep walk up to Castell Dinas Bran (for those who do not speak Welsh I should explain that this means  “Dinas Bran Castle”) was a joy.  It is situated in the most wonderful location, with glorious views.  The information board at the top explains that it only existed for 20 years in the 13th Century before it was destroyed for good by fire.  The board doesn’t explain how the fire started, but I suspect it might have been that Edward I chap or one of his henchman who was to blame, rather than by a carelessly sited candle blowing in the wind.  Either way, I  imagine the Welsh prince who had built the place and who lived there wasn’t too happy, what with there not being much in the way of home and contents insurance back then.


From Dinas Bran I headed down and on to walk north along Offa’s Dyke Path. The path does not follow the Dyke hereabouts but runs, partly on a minor road and partly through open country, along the base of the spectacular limestone escarpment that dominates the hills in this area.  It makes for wonderful walking, until a bit of a muddy trudge down to World’s End Farm. I even passed a field of Highland cattle, setting me up nicely with thoughts of Scotland. The signs on all the World's End Farm gates here about ask you to close them as it is an organic farm and needs this level of bio-security.  Which sounds pretty flawed science to me.  How does a closed gate stop, say, the spread of TB?


After World’s End I headed back along lanes to Llangollen following in the footsteps of George Borrow, him of Wild Wales fame.   I like to think that on the occasions today when I did see local residents I didn’t talk such self-aggrandising, patronising b*llocks as he did when he met their predecessors.  I wonder if anyone has ever tried to recreate his walk around Wales?  That would be a great project…