Reflections on a Great Day in the Alps 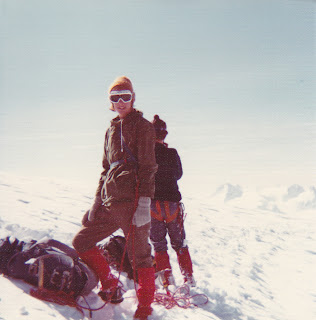 
Well weather wise it was not the best of seasons in the .  Not that I am any kind of expert.  It was the first time I had ever been there to walk and climb, my previous single visit having been on a skiing trip half a dozen years earlier.

One of the risks of long awaited, and long anticipated holidays, is the potential let down caused by poor weather that risks scuppering great plans and good intentions.  When this happens I face a battle of the mindsets – one telling me to get on and enjoy it regardless, and the other loudly complaining about the injustice of nature, and uttering phrases such as "damn the unreliability of the Azores High Pressure Belt".  Yes, I know that last bit suggests I am a bit Skod*, but then that’s what comes from studying a compulsory meteorology module at university.

*My 'Skod' was first diagnosed by Mrs Fellbound who is actually Dr Mrs Fellbound. It is a medical term meaning 'Some Kind of Disorder'.


Fortunately, with a group of great companions who were ever optimistic, the rather indifferent Alpine weather in the Austrian Otztal Alps this summer was seen as a series of opportunities.  When it was poor, which was especially true of our second week, it gave us the chance to indulge in hut bound dossing.  This comprises brewing tea, lying for hours in sleeping bags, joking, listening to Steve D’s endless optimism (“it’s breaking up out there, I reckon there will be blue sky in a few minutes”), and scrounging left over food from rich Germans and Austrians who were based in the more luxurious rooms, whilst we filled the “Matratzenlager” up in the gods near the water tank.  And at our most energetic, Steve, Foxy, the lovely and sadly late John B. and I even managed to find the energy to practice building snow holes in the clag just a few dozen metres from the hut.


But the weather on my birthday, in the first week of our trip in August, was set fair.  There were 11 of us in total in our party from the Aberystwyth University Mountaineering Club, sleeping initially at the Breslauer Hut, which is above the village of Vent at 2840m.  We tended to split into a couple of groups, either going out on day climbs or heading off to other huts for a couple of nights, crossing glaciers and climbing various easy peaks on the way.

So, on the morning of my 20th birthday we emerged from the pits of our sleeping bags at a horrible, unearthly hour, my first  “Alpine start”.  This was to make the best of the day before the sun made the crust of the snow too soft to walk on, leading to a thigh deep wade through a white morass.  Muesli at 4.00 a.m., with water rather than milk, a slab of Christmas Cake courtesy of Cathy B., and a mug of luke warm black tea.  I threw most of it up.  Nerves, or just the indecently early morning attempt to hold down the inedible?  And then we were off.
Now for an average Alpinist this would not be a tough day.  But for a fell walker with a slight nervousness of undue exposure, and virtually no real climbing experience, a longish Alpine Grade 2 ridge sounded a tough call.  The south-east ridge of the Wildspitze, which at 3768m is the second highest mountain in the Austrian Alps.  We had decided not to go by the tourist route over the glacier and relatively easy snow slopes, but by a real mixed mountaineering route, albeit a very easy one.  Not the stuff of Bonington and Scott, even though (The) Pete Boardman was one of our number**.

And so, for me, it did indeed prove to be tough.  As we scrambled over the easy ground near the hut someone realised we were a rope short.  It was the rope that I was supposed to bring.  Nerves again or stupidity?  I set off back to the hut, with the friendly encouragement of the others ringing in my ears.  You know, supportive stuff.  Things like “tosser” and “call yourself a Viking?” and “dick head!”.  Well my excuse was it would give them all the chance to sit and get their breath back after the initial exertions.

Then it was on with the scrambling, steeper, higher and ever increasing exposure , crossing first the Urkundkolm (3140m), then the Otztaler Urkund (3556m), the ridge becoming more pronounced, the drops seemingly ever higher and steeper.  Most of my mates moved elegantly, smoothly and with calm confidence founded on their experience of much steeper rock and ice, and the innate abilities they seemed to possess by the rucksack full.  I moved hesitantly, breathlessly, heart racing, mouth dry, conscious of the looseness of the rock, the unfamiliarity of the steep snow and the seemingly endless drops on either side of the ridge.  Ant J, the natural leader of the party, and Steve and Colin M, all accomplished climbers to my mind, rigged up rope handrails for us on some of the more exposed sections, and belayed one or two of us at other places, kindly and patiently hiding their exasperation with the muppet who was not able to solo up what, to them, was quite easy ground and who was slowing them down.

I guess there were 3 or 4 hours of this. The ridge after the Otztaler Urkund became very narrow and pinnacled.  I felt abject terror for much of this time, which I think I largely managed to hide, despite the struggle in my head.  And a constant feeling that I would never, ever, do this sort of thing again.  And then as time passed I experienced the increasing realisation that I was doing it, that I hadn’t bottled it, that actually the situation was just f***ing amazing, and, bloody hell, these views are just incredible, and I am so glad that we didn’t opt for the “tourist” route and follow up all those guided parties in a roped line across the ice and snow.

The ridge ended at a snow col, and we moved on to what I could grandly call a face, but it was really just a fairly steep slope of mixed snow, ice and rock, and it wasn’t really very difficult, even for me.  But by now I was moving more confidently, the drop was behind me and between my legs, rather than to both sides and my morale was now sky high.  We continued upwards largely unroped.  I now felt fit and at ease.  Overconfidence led to carelessness and I kicked a large, loose rock, setting it off to land on Steve’s hand, a few metres below me.  It must have hurt a lot.  He didn’t swear, well not much.  He said it was ok and not to worry about it and he just carried on.  Hero!  The guidebook had warned us that the greatest objective danger on this final section of the climb was being “struck by a sardine tin thrown from the summit by an unsuspecting climber from the tourist route unaware of the proximity of another route below them”.

Then we emerged onto the ridge of the south summit and bounded up to the large metal cross at the top for photos.  Large smiles all round, if not large drinks.

It would be inaccurate to use the old cliché and say that the rest of the day was an anticlimax.  Freed of tension (always dangerous on a mountain) we headed down the “easy” tourist route, across the Mittekarferner glacier and back to the hut for early afternoon, full of the climb and what we had achieved.  We stuffed the rest of our gear into our rucksacks then hurtled down the path, below the snowline now, to Vent.  Tents up.  Bar spotted.  Beers purchased.  More beers purchased.  A celebration fit for a Viking’s birthday.  I can’t remember if we sang or not.  We usually did if we were anywhere near a bar.  Steve and John B. would normally start.  In tune.  Colin, Ant and I would always join in.  Out of tune.  But as the beer flowed, we would never hit a wrong note.  Or so we believed.  Rambler.  Wild Rover.  Thyme.  Bread of Heaven.  Uncle Joe’s Mint Balls.  Lancashire, , .  Whatever.  They all resonated and symbolised our love of the hills and the purity of the special inebriation that can only come from sharp, crystal clear mountain air and snow bounced sunlight.

As you will have guessed from the photographs this was long ago.  1977.  Just yesterday really.  It was a great day in the , part of a superb summer.  Whatever the weather.  I can no longer recall each detail.  But I can sense every feeling, and every experience, all heightened by their newness and the adventurous spirit of youth.  And my mind still lives those friendships, irrespective of years and distance.

**  Pete Boardman was one of the great mountaineers of the 1970s.  He joined the legendary duo of Chris Bonington and Doug Scott on a number of expeditions, including the magnificent triumph of the SW Face of Everest in 1975.  After many other expeditions and superb achievements he tragically died whilst attempting  the NE Ridge of Everest in 1982.  Our Pete Boardman was not quite the same person, but he always insisted, rightly in my view, that he was a true original, and always signed the hut books as “(The) Pete Boardman”.  Well it always set the German climbers gaping and whispering, and gave our party that added bit of kudos and credibility. (The) Pete Boardman now runs a chip shop in Kirkby Stephen.
Posted by FellBound at 21:03 2 comments